On the morning of September 14th, I logged into mSphere’s manuscript submission page and uploaded a very cool paper describing our efforts to model the number of colonic tumors in a mouse model of colorectal cancer based on the composition of the animals’ microbiota 70 days earlier. I’m very proud of the paper that I wrote with my former graduate student Joe Zackular. But I’m also very proud of the manuscript tracking number we received: mSphere00001-15. Our’s was the first paper to be submitted and then eventually accepted at the new journal being published by the American Society for Microbiology. 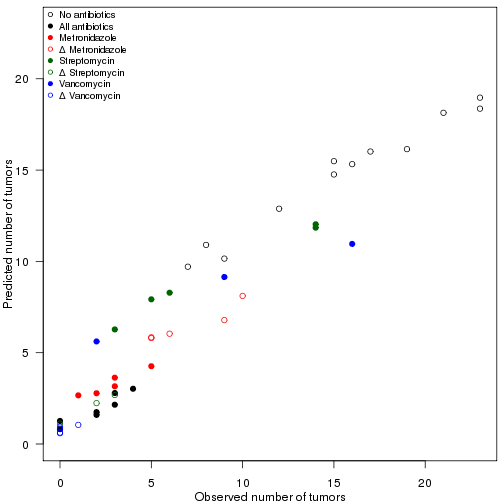 Joe’s paper was the last chapter from his thesis. The methods and approach parallel another paper from my lab published at mBio trying to quantitatively predict Clostridium difficile colonization in a mouse model based on the the structure of the microbiome by another former student, Alyx Schubert. Although these are very different animal models, I’m happy that they both came out in ASM journals at roughly the same time. We initially submitted Joe’s paper to Scientific Reports, Nature Publishing’s open access journal (aka Nature’s PLoS ONE). Five months later, we had received one round of reviews and we were no closer to a decision when the editor handling the paper withdrew two months into the second round of reviews. So I pulled the plug and told SR to go fly a kite. There’s a deeper story here about the Fallacy of Sunk Costs, but needless to say, we should have pulled the plug much earlier.

Despite the horrible experience, the timing was great - mSphere was about to launch. mSphere and mSystems are the two newest journals from ASM and join mBio as ASM’s three open-access journals that sit along side the society’s other high quality specialty journals. As part of the roll out for the new journal, Vincent Racaniello interviewed Mike Imperiale (mSphere’s Editor-In-Chief) about the new journal. Appropriately, the interview was mostly about the journal and Mike’s vision, but also a bit about our decision to publish with mSphere and what it meant to me to be first. I thought I’d use this as a forum to expand on those thoughts.

Having talked with Mike numerous times since the announcement of mSphere, I knew he wanted to do things differently. One thing they wanted to do differently was to help speed the review process along by considering reviews from previous journals. So, I uploaded the paper to mSphere along with our previous reviews, our response, and the marked up version of the original submission. The paper was handled by Susannah Green Tringe, who secured an additional review that we were able to quickly address and it was accepted on September 22nd. BOOM! How’s that for rapid review? Of course I’m biased, but we were very happy with this result. This is only an N of 1 and there are probably people that are similarly happy with SR, but knowing Mike, Susannah, and the rest of the Editorial Board, it’s hard to imagine them letting manuscripts linger for months.

Aside from being anxious to get this paper published (it had been public on the paper’s GitHub repository), I was also anxious to be the first mSphere paper to be published. Way back when I was a postdoc in the lab of Jo Handelsman at the University of Wisconsin, I marveled each day at the complete collection of the Journal of Bacteriology and Applied & Environmental Microbiology that sat on the shelves. Legend had it that Thomas Brock gave them to Jo when he retired. I love that the first paper published by JB in 1916 was titled “The Pedagogics Of Bacteriology” by David Bergey of Bergey’s Manual of Systematic Bacteriology fame. What better way to start the flagship journal of a society? Go read that paper. It is as timely today as it was then. I don’t claim that our paper will be as timeless as Bergey’s, but I like to think that what it stands for are themes that will help the success of mSphere.

Open and transparent. mSphere is clearly an open-access journal. Anyone that wants to go read our paper, was free to do so without paying a dime the day it was posted. I would like to propose that there’s more to being open than just publishing in open access journal. Our data are publicly available at NCBI’s SRA. The entire analytical history, code, documentation, and a executable version of the manuscript are available through an online repository hosted on GitHub. You should be able to get our data, go to that repository, run our analysis and reproduce the paper. More importantly, you should be able to extend our analysis to address additional questions or use it to improve your analysis.

Microbiome research. If you’re a microbiologist, you would have to be living under a rock to not know about the microbiome. Microbiome research is frequently derided as being descriptive and lacking mechanisms. This paper and our related C. difficile paper use a random forest regression analysis to make quantitative statements. In the current paper, we were able to predict the number of tumors that would arise in our mouse model based on the community structure of the mice at day zero. Using only 12 bacterial populations, our model was able to explain 68% of the variation in the data. This is not your typical “diversity drives X” or “as you can see in our ordination…” study. The model points to provides a quantitative framework to understand the patch contribution each population makes towards tumor development. I hope that the future of microbiome research will build upon these modeling approaches to see the models as hypotheses and tools to explain observations and make predictions.

ASM. It is hard to overstate my appreciation for ASM. My career would not be where it is were it not for the society and Applied & Environmental Microbiology. Two of my papers are among the top ten papers ever cited at AEM. Now that I am an editor for AEM and see how the sausage gets made, it is clear that they aren’t the typical AEM papers and probably shouldn’t have even gone out to review. But they went for it and gave us phenomenal exposure to the thousands of ASM members that we wouldn’t have gotten without their backing. ASM’s journals may not have gaudy impact factors, but it is hard to discount the value of papers with thousands of citations and downloads. I am very happy to support ASM with advertising their new journals. I am confident that they will continue to set an example for disseminating important and impactful research.

I believe that we lead by our example. I won’t claim that our paper is perfect - no paper is - but I hope that just as Bergey called JB’s readers to merge teaching and science 100 years ago that our study will set an example for the approach, scope, and approach to research for the coming years.